On the week-end of 2-3 March, 26 swimmers representing the different European Schools of Brussels participated to the short distance Champs of the European Forces Swimming League (EFSL), this time organised by our team. Our team, ESB obtained 35 medals, including one gold ones and 8 silvers.

Congratulations to the medalists: Eleanna Kotsomyti (IXL – 8 medals, including one silver), Jonas Eversonas (WOL – 7, with one gold and 5 silvers), Giulia Solaini (UCC – 6 medals), Aura Ortega Claici (LAE – 5 medals, including two silvers), Jules Pellier (IXL – 5 medals), Attila Sallai (UCC), Alex
Jany (IXL), Ines Mazzola (UCC) and Raphael Bostaji (UCC) (one medal each); and to all other qualifiers and participants to the relays. These results are the fruit of a number of competitions and trainings since September. 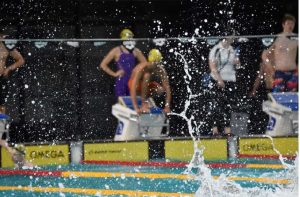 ESB Octopus is the swimming team of the four European Schools of Brussels. It is open to all pupils and students since the age of 5, with a minimal level for being involved in competitive swimming.

Interested? The ESB is going to organise in May a small competition to all swimmers who would like to join the team. This is not a selection test! The goal is to show what a swimming competition looks like and help to decide by yourself if joining the team or not. The only condition is to be able to swim at least 50 meters in two strokes. We however strongly recommend to train at least once a week. The exact date, pool and registration details for this Sprint Meet will be announced in the Schools and APEEEs newsletter, as well as in the stands of the ESB swimmers at the Springfest/school party.

Cafeteria – Top up by credit card